There are so many amazing students in the Concept Network, and here is where their work is displayed.

Alfonzo Torcuator- Michigan Math and Science Academy Dequindre– Alfonzo always finds a way to cleverly relate historic circumstances with current events. He uses his sarcastic
sense of humor to cleverly give a deep and enjoyable analysis of historic events. To show how much he loves history and how knowledgeable he is on the subject, here is some of Alfonso’s work:

Making a Meme about Julius Caesar: 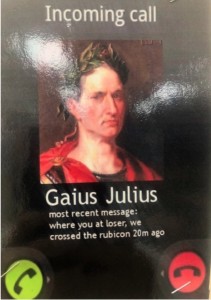 Zariah Mitchell- Horizon Science Academy Cleveland High– Zariah’s 9th grade history class was given a performance assessment about the French Revolution . The assignment was to write a one page reflection about a specific event; Zariah chose the “Reign of Terror”. Upon completion of the essay, the students were to create a movie poster based on the event they researched. Zariah did an outstanding job and used the Horror genre to make her movie poster. 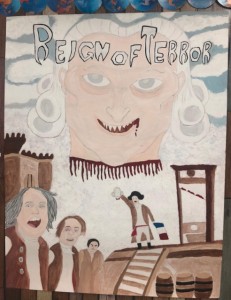 Edward Hernandez- Horizon Science Academy McKinley Park- The students were assigned an event in the colonies that led to the American Revolution and were asked to draw a representation of the event from the perspective of a loyalist or patriot. Edward was assigned the Sugar Act from the patriot’s perspective. His visual shows the redcoats enforcing the tax on the colonists while in the background colonists are smuggling to get away with not paying the tax.  He incorporated a notification of the Sugar Tax similarly to the way that Martin Luther complained about the church years earlier, by nailing it to the church. 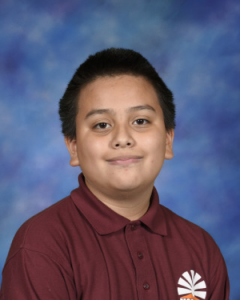 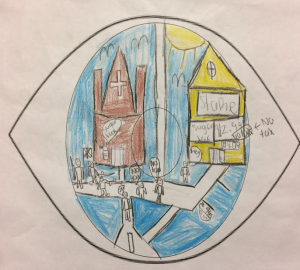 Pamela Smith- Michigan Math and Science Academy- If the word “history buff” applies to anyone, that would be Pam. To show how much she loves history and how knowledgeable she is on the subject for the decades day during Spirit Week, she dressed up as Robespierre and made a scull of Louis XVI to carry around, (see picture below).   She also completed an in-depth graphic organizer about the Chinese social class system. 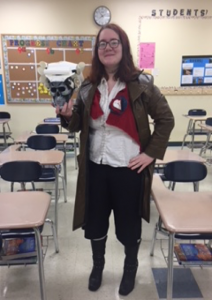 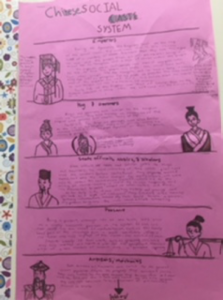 Piu Munia- Michigan Math and Science Academy– In Piu’s 11th grade Government class, assigned students a difficult text (Declaration of Independence). Students were asked to take this primary document and translate it into modern terms and made a visual representation. All six parts of the DOI had to be translated in laymen’s terms. Piu took charge of her group and delegated responsibility and made sure that her group did a stellar job in their project. 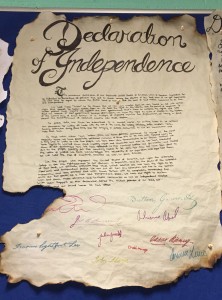 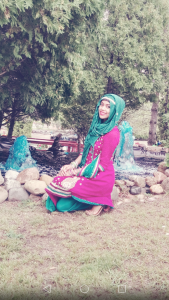 Alyssa Ziegler- Horizon Science Academy Columbus High School– Alyssa recently turned in an exceptional project during our unit of study on the transcontinental railroad. The postcard she created was written from the perspective of a traveler of the transcontinental railroad to a friend back east. Alyssa’s illustration on the front of the postcard is what made her project so impressive. 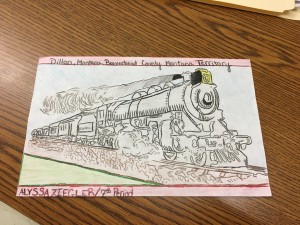 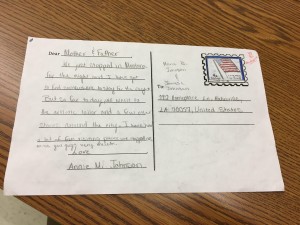